This is a continuation of two requests that have been marked as completed in my notifications, but the function still has a major flaw that makes it harder to use than just putting down a line and duplicating it.

Currently there is a general trend direction feature that has three parallel lines, but it is for the general direction of a market and is not very precise. A support channel is drawn by clicking on the first support price, then dragging a line to the second support price,and then grabbing the upper parallel line and dragging it to the furthest resistance point between the two support points. There is a middle line that price action often interacts with and it can be useful, but it is invisible …

Drawing a trend channel from support/resistance rather than drawing it from the mid-line. By starting a trend channel off of the desired resistance or support; you know the channel is exactly where it should be. I find that from there it is easy to find the channel and a mid-line naturally falls in place by being a 50% data input and low and behold it is always in the perfect spot according to the price action. When drawing from the mid-line first it creates a lot of extra work trying to adjus…

Currently when you use the Trend drawing tool you have to determine the slope of this new trend using the midline, which is awkward at best, and inaccurate at worst. A much better implementation would be to just add the functionality into the line drawing tool by adding a second option in the middle of the line where you can expand the second edge (and midline) to whatever width you want.

I marked up a drawing to better explain: 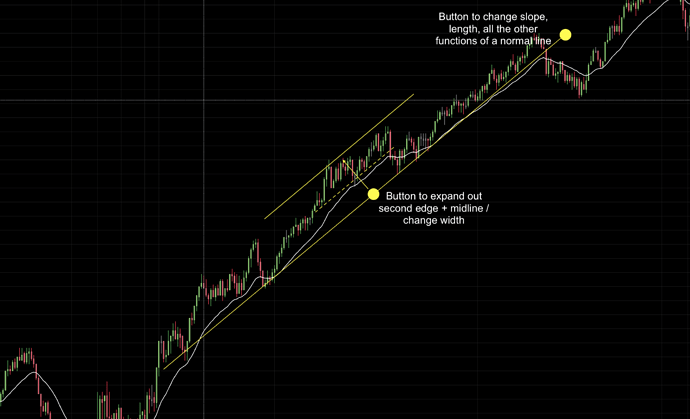 I did see the indicator and that improves it a little but still functions pretty poorly: Can’t change line styles and it starts really thin. Hard to move the line once it’s in place.

Any update on this? The trend drawing tool is 100% useless atm.

I was a little irritated with the channel drawing also so tried to make one that sucks a little less. It is a variation on what was already in the community offerings. It’s called “Extended Price Channel”. Maybe this will help, it is good enough for my purposes, and less annoying to me even though it isn’t perfect.