Hello, I am having problems with my charts. The problem started after a demo account was added to my account. The platform would notify me that I needed to contact support to enable a demo account because I couldn’t paper trade. Once I contacted support and got a demo account running all of my screens went blank. I closed Tradovate and turned it back on and nothing. I even restarted my computer and nothing. So far all I see is a blank screen. Can anyone help? Thank you! 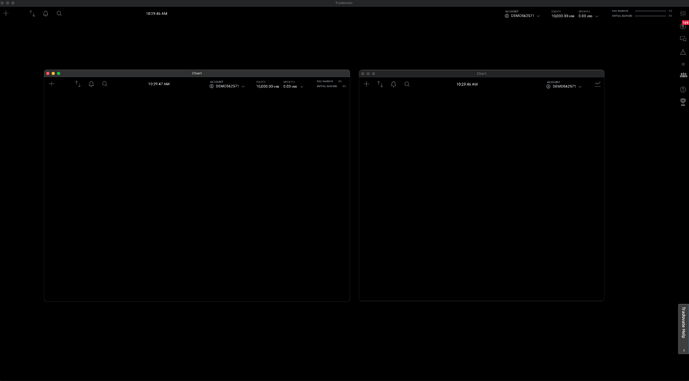 Have you tried adding charts from the + symbol on the top left?
You can drag and drop charts and other widgets from there.

Yea that’s what I tried. If you see the screenshot there’s three charts opened. Two small ones inside of a large one. All three charts were opened using the + symbol as you suggested. And no matter how many times I try to open a new chart, it is still blank. Btw this is the desktop version on mac. Web version works fine

My bad, I thought it was 3 individual windows that were opened.
Unfortunately, I think you will have to wait for the developers to get to this.
There are also some problems with the Windows app that started to happen with the past update they did on 11/4/22. Hopefully they will have all versions of the app sorted this weekend.

I’m having the same issue, I think they are having some problems on their end